Hope For The Journey 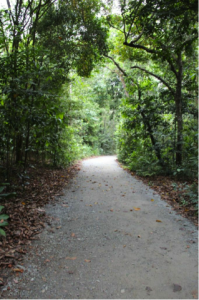 For many women, one of their greatest fears in becoming a parent is suffering the loss of a miscarriage. After going through the struggle of infertility and finally undergoing in-vitro fertilization successfully, Felicia was overwhelmed and in deep shock when she lost her firstborn in 2011 to an unexplainable miscarriage. But the resilient lady did not give up her dream of becoming a mum, and conceived again about a year later. Sadly, she suffered a second miscarriage in October 2012. Here is her story.

1. Can you share with us what happened when you went through your first miscarriage in 2011?

On 2 November 2011, I was having dinner when my water bag suddenly burst. I rushed straight to the hospital and was told the bad news. Not only had my water bag burst prematurely, I was already dilated to 3cm! At just 23 weeks, it was too early for my baby to be born – he would have an almost-zero survival rate. The main aim was to delay the delivery for as long as possible. If we could make it to week 24, our baby’s chance of survival would jump to about 40-50%.

I remember just lying there, not knowing what to do, hoping for a miracle. I was confused, lost, worried, and yet I was being asked to relax. Of course, that was nearly impossible!

Unfortunately, two evenings later, I realized that something was very wrong. I felt sharp pains piercing my stomach. After a few minutes, the pain would go away, and then come back and repeat its cycle. The nurse realized I was running a fever of 38.3 degrees Celsius and informed the doctor immediately. I had gotten an infection – this meant that I would not be able to keep my baby inside and would have to deliver soon.

We were terrified when the nurse couldn’t find the baby’s heartbeat. By then, my pain had gotten more severe. The gynecologist came in and realised that my baby had descended to the position ready for delivery. With no time to waste, I was prepped for a delivery. At gestational age of 23 weeks and 2 days, they could not perform a caesarean section for me, and my baby was considered small enough to deliver naturally.

Before long, my baby was delivered, but no crying sound was heard. The pediatricians took him aside immediately to check on his condition, but my eyes were fixed on him the whole time. Then the pediatrician brought my baby over and placed him on my chest, gently and solemnly. The doctor informed us that my baby’s heartbeat had dropped drastically, despite their best efforts to resuscitate him.

I was in shock and in pain. I could not stop crying.

We took some photos in the short time that we had. At 10.07pm my baby, Dominic Low, was pronounced dead. He weighed only 525 grams. His eyelids were still fused together, unable to open. But his hands and legs were well-formed, tiny and delicate.

2. How did you cope with this sudden loss?

I was speechless after it happened, crying most of the time. I kept on wondering why this had happened to me. I wanted answers, but there were none to be found. Still trying to cope with the loss, I turned to my work to keep me busy. But every night would still end in tears.

Then one night, my hubby said “Dominic will always remain in our memory”. This jolted me out of my depression. I thought to myself, “Why only in our memory?” I wanted to let people know I, too, had been a mother before, and had delivered a boy. So the next morning, I got up early and start typing my draft. I worked on it consecutively for 3 days, non-stop. It frightened my hubby, who worried that I was drafting my “last letter”. After finishing my draft, I emailed it to my client, who was a publisher. That’s how my first book – To Baby With Love came about.

The book details my journey from getting married to planning for a child, thereafter seeking medical treatment, and finally, losing Dominic. It was a life journey for me detailing my emotions, thoughts, feelings and the cost for all these treatment as well, as well as my interactions with various ones along the way. During this time, I decided to become a Christian, and my newfound faith in God and the project of working on the book are what helped me most in coping with the grief.

3. How did you react to the news when you conceived again?

I was definitely thrilled! Actually, I sort of knew that I was pregnant very early on, and maybe even expecting twins. During the first week of my pregnancy, I received identical messages from two different friends that referred to a church newsletter which had said “Double for the Trouble”. In the newsletter, it said that God will give you double in quantity or in quality. So I told my hubby that I might be conceiving twins even before I confirmed that I was pregnant.

4. How did the second miscarriage occur, and what went through your mind during that time?

Suspecting that I suffered from Incompetent Cervix (IC) from my first miscarriage, with this second pregnancy, my hubby and I decided to do a cervical cerclage – a stitch to prevent my cervix from opening too early. However, the unavoidable still happened. I woke up one morning, bleeding, and rushed to my doctor. The stitch had been ripped apart, and there was no way my twins (who were at 21 weeks at the time) would be able to survive outside of the womb yet. Again, I was warded in hospital and bedridden, hoping and praying that the twins would hang on.

Unfortunately, two days later on 2 October 2012, I experienced contractions pain again, and had to deliver my first of the twins, Elvis. We were hoping that we could still save the second one, Louis Low. However, the contractions kept on coming and I was forced to deliver Louis just half an hour after his brother. Louis was still moving when I saw him. I was in shock and denial, staring at both twins, powerless to do anything to help them.

My head burned with questions. Why is our medical industry not advanced enough to save my babies? At my first miscarriage, I could say I and the doctors were ignorant of my condition – but at this second miscarriage, could I still say we were innocent? Had I indirectly caused the loss of three lives in less than a year’s time frame? I was speechless, and more depressed.

5. How has it been since then?

Most people who have cervical cerclage can carry their baby to full term, but these cases are mainly for single pregnancy. No one had a twin pregnancy like in my case. Was it a disaster right from the start? I have no idea.

This time round, I found myself with no plans, no direction and no goal. However, my hubby was stronger and he set the direction for me. With his encouragement, I laid out my plan and goal – to find a doctor who is capable enough to manage my high risk pregnancy. After the two miscarriages, we know I can conceive – the question is how to keep my baby till full term. Also, I need to lose weight, as the various treatments and medication have caused my weight to balloon, which would increase the risk to baby if I conceive again.

I have been seeking God a lot during this time, asking him to help me find inner peace and rest, and new hope. After my two miscarriages, I was officially water baptised as well, which was a great leap of faith for me, as I am the only person in the family who is a Christian.

6. Tell us more about your new book. 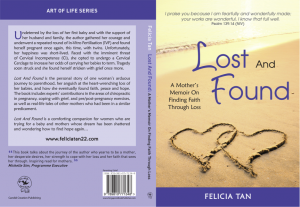 At first, I had no intention to write this second book, Lost And Found. My hubby asked me to, saying that his friends had requested to read about my journey. It was definitely a pleasant surprise for me, that people were so interested to read my story. So, I decided to pen a second book.

It was much harder to write this second book about our double losses. After much discussion with my publisher, we decided to add on more new information. We wanted people to be more aware and not take things for granted. That’s why I have included other peoples’ stories alongside my personal story, to give different perspectives and views.

Moving forward, my hope is that I will conceive naturally this time round and keep my baby inside me till full term, and deliver a healthy baby. Amen!